The three newest team members that start patrols in September will be historic for Metrolinx, as well as a rare in-house security resource on Canadian public transit lines. 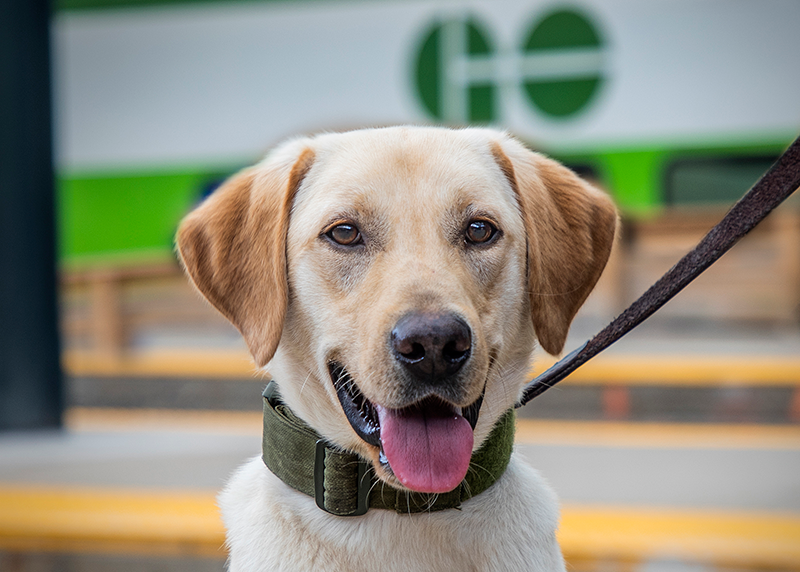 But as Instagram-ready as three members of Metrolinx’s new K9 unit seem to be, the dogs are all business. The trio begin official patrols in September across Greater Golden Horseshoe transit lines, watching and sniffing out potential threats to customers and staff.

Toronto Police Services detection dogs have been working behind the scenes at Union Station, Canada’s largest transit hub, keeping customers safe since 2013. Now, that responsibility falls on the furry-shoulders – on-call 24 hours a day – of the Metrolinx dog unit.

Their main duty will be in detection, including investigating suspicious packages. Following the rigorous selection process, the teams (handler and canine) receive specialized training from the Police Dog Services team at Toronto Police Service. As part of that, the dogs spend time doing what you might call classroom work; learning the distinct odours associated with numerous dangerous materials. That skill is referred to as imprinting. 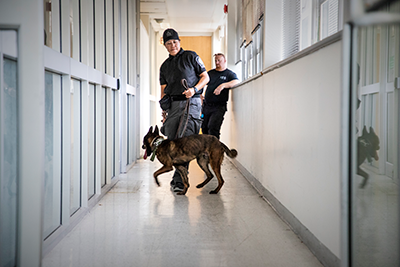 Transit Safety Officer Cindy Shigetomi and her K9 partner Raiden at an undisclosed Toronto Police training facility. The accredited 12-week training program prepares them for all of the challenges associated with keeping a larger transit network safe.
The second major part of the police training process involves testing those imprinting skills in a real world setting. That means hiding dangerous materials around a secret Toronto Police training facility and getting the handlers and dogs to sniff them out.

We always encourage our customers to say something if they see something. Now with our new K9 officers, we can ensure public safety by investigating these incidents on our network much quicker.

The dogs were carefully selected based on a combination of genetic and behavioural qualities.

While some breeds do tend to make better detection dogs than others, breed isn’t necessarily the most important genetic factor. Having a keen nose on the other hand, is an absolute must. So is being in good health and passing a strict physical examination by a veterinarian.

The dog’s ability to respond to commands is also very important, and so too is its ‘hunt drive’. Essentially that means how long the dog will stay interested in searching for something. In this case, an ideal canine candidate is one that never gives up.

Another important factor when selecting a dog to help keep Metrolinx infrastructure, stations and customers safe, is how well the animal copes in large public spaces and how they react when they’re near noisy transit vehicles.

While we have a robust safety and security program in place, K9 teams are proven at deterring danger and enhancing safety.

Unlike tracking dogs, which help apprehend suspects, or narcotics dogs which help sniff out drugs, the Metrolinx K9 teams’ sole function is detection. The Metrolinx K9 unit will continue to consult and work closely with their police partners on when they should be called in.

While the dogs are friendly, the Transit Safety team does ask customers to respect their space when they’re on duty. 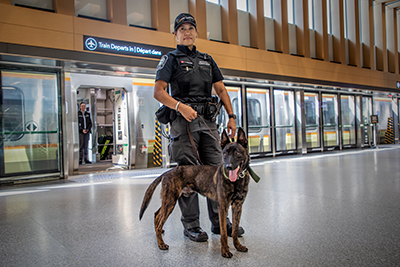 Transit Safety Officer Cindy Shigetomi and her K9 partner Raiden at the UP Express terminal at Union Station. 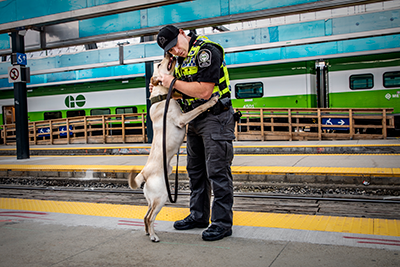