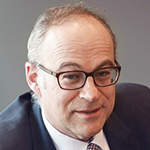 Dr. Brown is a founder and Chief Executive Officer of the Ontario Telemedicine Network (OTN), one of the largest and most active integrated telemedicine networks in the world.

Dr. Brown has won numerous awards for his work in Telemedicine, including most recently, a Meritorious Service Medal for his contributions to health care in Canada. In 2010, he was chosen as one of 25 Transformational Canadians by a national media panel sponsored by the Globe and Mail, CTV and La Presse. He is a Past President of the American Telemedicine Association, which named him to its College of Fellows in 2015.

An emergency physician who studied mathematics and engineering before embarking on his medical career, Dr. Brown is a passionate advocate for telemedicine as a tool to improve access to care, quality of care and the sustainability of health care systems.